Winter Arrived Quickly: What That Means for Plants

Thus far in November, a few arctic fronts have made their way across the

Thus far in November, a few arctic fronts have made their way across the Continental U.S., which have resulted in some unusually cold lows across the Northern Rockies and Upper Midwest. But this latest front is quite the doozy when it comes to cold blasts. Case in point, at the University of Georgia, our temperature swing is expected to be 44 degrees in 24 hours (69 to 25F). That forecasted low of 25F is just a couple of degrees off of our record low for the date. And to think that on October 2, 2019, our high was 101F… we have some very confused plants currently. Chances are, you are in a similar situation—and I don’t want to hear any bragging from southern California or south Florida folks! 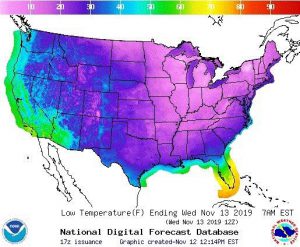 Forecasted low temps across the Continental U.S. for the night of November 12, 2019. Blue means it’s going to be chilly.

So the question I have been asked (literally) every 15 minutes today is, “Can plants be protected from sudden and extreme cold temperatures?” The short answer is—it depends. Let’s walk through a few scenarios based more on my experience than scientific studies—focusing on woody plants.

The Plight of Softwood Growth

Freeze damage to woody plants in the fall is just like plant damage in the spring, in that the newest growth (also termed softwood growth or butterwood) will receive the most substantial damage. Also, broadleaf evergreens seem to bear the brunt of damage compared to conifers or deciduous trees and shrubs. Most of this new softwood growth occurs in early-mid fall (September until the freeze date) and is the result of improved environmental conditions in the fall (lower temperatures and more soil moisture). This “fall flush” of growth is encouraged by high fertility levels and abundant soil moisture and for these reasons, generally it is not recommended that fertilizer be applied in the last third of the growing season, unless you are trying to correct a nutrient deficiency. It’s also recommended to taper off irrigation, especially to established shrubs and trees, during fall.

Getting back to softwood growth … it will be damaged when temps drop below 32F, but things get progressively worse down to 25F. At this point, new growth will die back completely to the point where the fall growth was initiated. Symptoms are similar to spring freeze damage in that stems and foliage will wilt and turn a dark brown/black to purple color. The only real remedy for this is to tip prune damaged stems or wait for spring bud break, which will cover damaged growth with time.

So—can you protect plants with softwood growth by covering or using irrigation? In cases where plants can be covered, that only gets you a few degrees of protection. So if you are dropping below 27-28F, it is unlikely to help. Same for irrigating. Sometimes we just have to suck it up.

The Plight of Containerized Woodies

There is an age-old misconception about woodies grown in containers—being that they are just as protected (from extreme cold) as plants in landscapes. Well, I say not so fast. In addition to what I mentioned above, container plants have a couple of significant disadvantages because the root system is above ground, and therefore is subjected to ambient air temps (unless covered in snow). Remember that a plant’s hardiness zone rating was developed based upon observing plants grown in-ground, not in a container (more on that in a bit).

Let’s look at a familiar scenario that plays out across the central and Northeastern U.S. annually, using Japanese maples as an example, as they are fairly cold hardy as a whole, listed as Zone 5b cold hardy (-10 to -15F). Let’s say you’re located in Cincinnati, Ohio (Zone 6b), so you assume that your (or your clients’) containerized Japanese maples will be fine with an early arctic blast that results in temps only dropping to 14F. After all, that is far above that Zone 5b minimum temperature of -10 to -15F. But after that initial 14F night, stems turn brittle and dark gray and you realize that the prized Japanese maple is doomed. How could that be?

Well, there are two factors at play. First, plants must undergo an acclimation period to cold weather, whereby they gradually become more cold-hardy as late fall and early winter progress due to reduced daylength and cooler nighttime temperatures. Only during mid-winter (mid-December to early March) are plants most acclimated to extreme cold weather. This is why extreme cold snaps in early fall lead to more plant damage. Second is an old rule of thumb that was passed to me by the late Fred Gallee (Callaway Gardens), yet one that seems to hold true. A containerized plant is typically subjected to temperatures indicative of two cold hardiness zones north (colder) of where they are located. So, essentially if you are in Zone 6b (Cincinnati, Ohio), that container plant experiences minimum root-temperatures equivalent to Zone 4b in an average year. Suddenly, that Zone 5b hardy Japanese maple is not so cold hardy in that container.

The Plight of Broadleaf Evergreens

Broadleaf evergreens are just that—evergreen. As a result, they continue to photosynthesize all year, and photosynthesis requires those stomata to be open. When stomata are open, carbon dioxide enters the stomata and oxygen and water are released. The important point is that water is released. Now you may think to yourself, how could a leaf photosynthesize when temps are below freezing, but in all actuality on a sunny day with temperatures at or just below freezing, the sun warms foliage (particularly the outermost leaves that receive a lot of sun) to well above freezing.

The problem is that stems on the interior (shaded) areas of the plant that generally provide those photosynthesizing leaves with water are sometimes still frozen—as is often the ground itself. So while water is being transpired, foliage is not receiving any water to replenish what is lost. As a result, the photosynthesizing foliage succumbs not to cold stress, but rather to drought stress. In this case, symptoms look just like mid-summer drought stress. Foliage becomes chlorotic and then necrotic (browns) and then drops. This exposes the next (interior) set of leaves to the sun which go through the same process until those leaves drop. Sooner or later, all foliage drops and the plant dies.

That concludes your cold physiology lesson for today … you will receive a test in the form of a nightmare. My apologies.